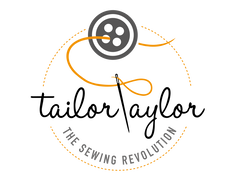 'Creativity is Contagious - Pass it on.' 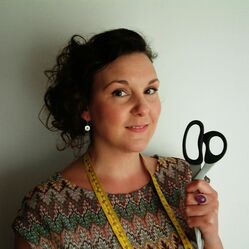 Come and join the #Sewingrevolution!

Hi, I'm Jenniffer Taylor, founder of the #sewingrevolution and Tailor - Taylor patterns and kits.
Not one to shy away from a challenge, my sewing journey started in 2012 with my first project - my wedding Dress.
I think every bride would agree, the dress is the most important item she could ever wear;
I couldn't find the perfect dress. Beginning to panic about this I made the decision,
"I'll make one !" WHAT!!! Yes, you read me right.
With no prior experience of sewing apart from little things I had made as child and my GCSE textiles which I completed in school, I was going to make my own wedding dress and begin my sewing journey.

The dress has now gone on to live a life of it's own.  Featured in Ineke Berlyn’ s book called 'Collections' which was published in 2013 because of the technique we used to make the 'Lace'. While, I could not stop sewing. Making things from cushion covers and little things around the house. As most sewists will confess, I became addicted to sewing.
I decided I was going to set up a Facebook page called Tailor Taylor and invite people to contact me for clothes that they wanted but just could not get. By doing this, I started to have to make things outside my comfort zone, learning more and more with each new project.

Around May 2013, Kirk had filled in an application for the Great British Sewing Bee 2014. I was completely non the wiser until it had been in the post for a week. I could have killed him at the time, however one afternoon I received a phone call. It was Love Productions, the makers of the Great British Sewing Bee calling Me! They advised that they had received my application and they were interested in inviting me to the first stages of auditions! I could not believe it! Not only did I make it past the intense and several audition stages, I progressed through the series until week five where I was beaten by a pair of Velvet trousers! With three million viewers, the rest they say is TV history and the start of my #sewingrevolution.

The feedback and comments I received after the show was so overwhelming. Stories of how I had inspired others to start sewing. I was compelled to do something about it.
I began to set up  workshops in and around the midlands based around upcycling and dressmaking. For me, Upcycling is a perfect way to encourage people to get sewing. Taking items that you may already own but no longer wear and transforming them into something new. It does not matter if you are going to make a mistake as your were going to throw it away anyway! You have nothing to lose.
I want to inspire and encourage people to have confidence in the new found skill and show off their makes by sharing on social media by using the #sewingrevolution hashtag.


With the #sewingrevolution gaining momentum, I have now become a familiar and prominent member of the sewing community, featuring in several sewing magazine and taking part in sewing exhibitions and events as well as continuing to teach across the UK.
I regularly appear on screen whether demonstrating on home shopping channels such as Create & Craft TV and more recently Sewing Quarter. To appearing on Made in Birmingham Tv and BBC's 'Right on the money' as a sewing expert in 2018.

I'm a Brand Ambassador for the following companies and organisations.
Korbond -The UK's leading haberdashery and clothing care and repair supplier.
Vlieseline -  Better known as Vliene, a famous brand providing interfacing and interlining for all your dressmaking and creative needs.
#LoveYourClothes - Part of the super crafter network. The #loveyourclothes campaign is part of the W.R.A.P initiative to reduce waste and stop items going to landfill.

Reaching a milestone in 2017, when I published my first, best selling and international  book - 'Girl With A Sewing Machine'.
​A no fuss guide to making and adapting your own clothes. which has inspired me to being designing and creating my own patterns and kits under my brand 'Tailor - Taylor'. Similar to my book, I want to inspire sewists to get making clothes by using their own body measurements. No squeezing or compromising on which size to cut out as you create the pattern to be 'your size' from the start.

Finally, I'm excited to be working on my second book which will be with you in spring 2020.

I truly believe that CREATIVITY IS CONTAGIOUS - SO PASS IT ON!
Watch this space, get sewing and join the #sewingrevolution!